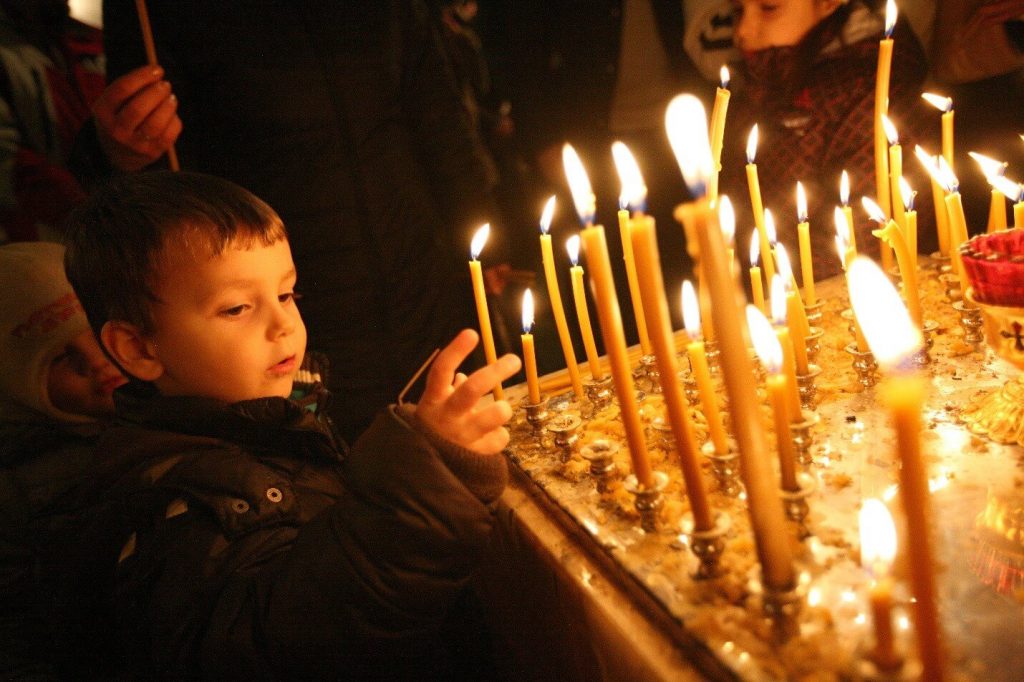 Church on Christmas: Can Your Ex Take Your Child?

It is normal for contentious issues to arise between even the closest married parents. Some of those issues can be amplified for parents that are divorced or are in the process of separating.  One of the most acrimonious can be the question of religion. Especially when the parents belong to different faiths or don’t share the same core religious convictions. Inevitably, this trickles down to the realm of child-rearing, with parents being at odds over which faith the children will be educated and raised in. And which religious tenets, traditions, and holidays are to be observed.

It’s not difficult to envision how differing religion and views can give rise to acrimony between separated or divorced parents.  Religious views often invoke passionate and even dogmatic positions. These differences are often magnified in comparison to other more mundane topics that arise in the course of child-rearing.

A few real-life examples from the Ontario family law courts illustrate the scenarios that can give rise to these kinds of conflicts:

How Do Courts Resolve These Kinds of Cases?

Needless to say, courts must wade into tricky, murky waters when trying to resolve religion-based differences between parents. Especially when they involve the manner in which children are to be raised, and the faith-based traditions that are to be observed.

Under Canadian law, there are two key considerations.  The first incorporates a principle from a Supreme Court of Canada decision called Young v. Young,[4] where the Court said:

The custodial parent does not have the right to determine whether limits should be placed on access. His or her obligation to make basic child-rearing decisions does not mean that an access parent of a different faith should not share his or her religion with a child.

As one court succinctly put it: “It is not for courts to choose between the religious practices of parents.”[5]

Embedded in this idea is the concept that courts will champion the right of a parent to engage in free religious expression. That they will override it only if there is something more significant than mere inconvenience, upset, or disruption to the child. And to a lesser extent, to the custodial parent.  In other words, there must be a “risk of substantial harm” to the child. Otherwise a court is not at liberty to restrict the access parent’s religious freedom.

Secondly, courts must guide their decision-making by the notion that the “best interests of the child” must govern.  This means that the court’s entire enquiry must have this key concept in mind.

That “best interests” test is framed against these background principles:[6]

To see how these legal tests apply in real-life, it’s helpful to revisit the three scenarios described above.

Returning to Rosenberg, where the mother wanted the court to force the father to adhere to Orthodox Judaism, she said the child would suffer emotional and spiritual harm if given non-Kosher food in the father’s home. She also argued that her own palpable distress over the situation would filter down to negatively impact the daughter’s well-being.  The court said this last element was not the correct test.  Rather, the focus remained child-centered, and required the court to assess the child’s best interests from that viewpoint.  When considered that way, there was no evidence that the father’s manner of caring for and feeding of the daughter would place her at any risk whatsoever.

In the Seed case, where the Muslim father wanted the children with him to participate in daytime religious fasting during Eid, the court likewise held that this did not put the children in danger. Especially since the father was not planning to make the fasting obligatory.  His request that the mother not serve the children pork was also reasonable. She could easily provide them with a balanced diet without it.  (The court added: “I find her description of the children’s participation in his religious observance of fasting to be intentionally provocative”).

Finally, back to the Voortman case, the Dutch Reform father succeeded in getting custody of his second child as well as the first. Even over the objections of the mother. Again, the guiding principle was that it was not for the court to choose between the father’s faith and the mother’s nascent interest in being a Jehovah’s Witness.  What tipped the scales in the father’s favour was his commitment to neither interfere with the mother’s access. Nor impede her desire to share her religion with the children.  The court said that – all other things being equal – the two children would be better off living with the father. Since he had agreed to facilitate maximum contact and involvement with the mother regardless of her religious views.

The other legal principle that comes from the court decisions centres around custody and access. Just because the custodial parent has the primary right to make day-to-day decisions about the child does not mean that he or she has the power to place limits on the other parent’s access. Even when religious differences are in the mix.

This is well-illustrated in a case called Fruitman v. Fruitman,[7] where the parents of two children separated after five years of marriage. Both of them strictly adhered to the Jewish Orthodox faith at the time, which involved observing the Sabbath with prohibitions against travel and work, and the use of electricity. But after they separated, the father moved in with woman who was initially Anglican, but who converted to Judaism.  Still, the level of religious observance in the father’s new home was no longer in line with Orthodox Judaism.

The mother asked the court to restrict the father’s access. To ensure that the children’s upbringing remained in keeping with the stricter doctrines of Orthodoxy.  She pointed out that she, the father, and both sets of their parents were all raised as Orthodox Jews. That she and the father had agreed during the marriage that they would raise their own children in that faith.  She felt that the children would be unduly confused if the father did not stick to the more stringent requirements of the Orthodox Jewish faith. Primarily during his access visits (such as transporting the children in an automobile during the Sabbath).

Despite the mother’s urging, the court declined to limit the father’s access rights. Instead, they endorsed the reasonable access plan he had proposed.

The court explained that in her role of custodial parent, the mother had the right to make basic child-rearing decisions, but this did not extend to limiting the father’s access to the children, or to automatically preventing the father from sharing his religion with the children.  A risk of substantial harm to the children might arise if the father were exercising fanaticism, but that was not the case here. In fact, he said he fully intended to comply with the tenets of Orthodox Judaism, including observing Sabbath, but had experienced recent challenges due to his employment situation.  He committed to the court, on behalf of himself and his new partner, that he would “expose the children to a traditional Jewish upbringing”.

What About Religious Holidays?

In the process of maintaining the rights of an access parent, courts will also safeguard the parent’s entitlement to have the child participate in specific, meaningful holidays, unless the overall circumstances are likely to harm the child.   As one court put it:[8]

Religious holidays are the quintessential markers of faith. They are the gatherings, the foundations of familiar affinity – the milestones of a life lived in accordance with one’s faith. They maintain traditional practices while nurturing adaptive and evolving religious expressions. To exclude a parent from sharing religious holidays with his or her child, irrespective of the child’s age, is to tear away at the very fabric of a parent-child bond.

Returning to the Rosenberg case, where the mother wanted the court to suspend the father’s access rights during the Jewish holidays, the court applied the “best interests of the child” yardstick, to note that a child’s relationship with the access parent is usually more important than the exclusive conformity with the other parent’s religious practices.  The mother’s decision-making rights as custodial parent did not trump the father’s right to share his religion with the child; other than her bald statement that she found the “insufficiency of the father’s religious practices offensive”, the court found no evidentiary basis to support suspending the father’s access to his daughter over the holiday season.

In most cases, a parent’s desire to have children raised in keeping with their own religion is based in a genuinely-held belief that it is in the children’s best interests.  However, as the cases above illustrate, the court must sometimes be called upon to take a more objective, third-party view on how best to foster a child’s more balanced upbringing, and one that remains equally mindful of each parent’s views.

For those separated and divorced parents who are trying to resolve a dispute on their own, without a court’s intervention, the following tips should be borne in mind:

Finally, for those separated or divorcing parents who struggle with finding a compromise when it comes to differences in religion and child-rearing, there is much wisdom in the ruling in Rosenberg, where the court wrote:

Successful post separation parenting is an exercise in mutual respect, cooperation and tolerance. Divergent views, such as in religious expression, are opportunities to model these qualities not only toward the other parent, but within society as a whole. I would encourage the parties, particularly the mother, to consider carefully the values that are to shape [the child’s] childhood. She has two parents and two extended families. Many resources are available to assist the mother and father to parent co-operatively. [The child’s] deserves no less.

We wish everyone a happy and festive holiday season!

1 Vote(s)
Share41
Tweet
Pin
Share
41 Shares
The materials contained in this website are intended to provide general information and comment only and should not be relied or construed as legal advice or opinion. While we endeavor to keep the information on this web site as up to date, accurate and complete as reasonably possible, we do not warrant the completeness, timeliness or accuracy of anything contained in this web site. The application and impact of laws can vary widely, based on the specific facts involved. For any particular fact situation, we urge you to consult an experienced lawyer with any specific legal questions you may have. Your use of this website doe not constitute or create a lawyer-client relationship. Should you wish to retain our firm, kindly contact our office to set up a meeting with a lawyer.