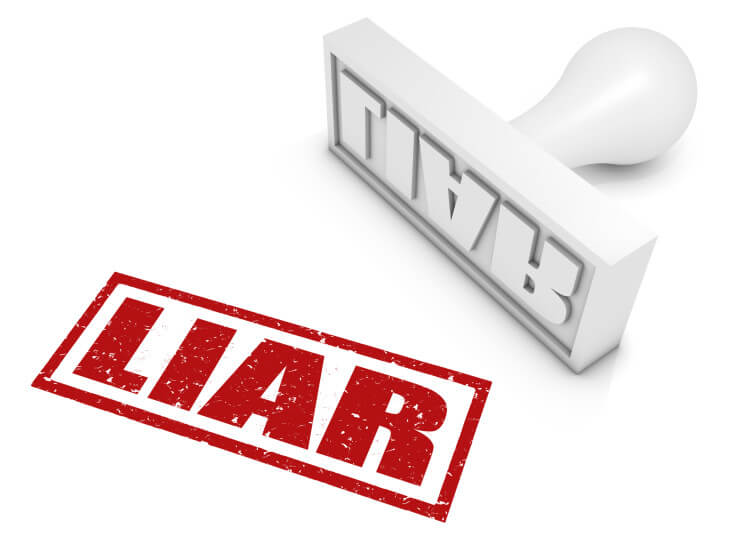 What Can Happen When You Lie About Being Employed

It is an unspoken principle that family law litigants must be forthright and honest in their dealings with each other, and especially in the evidence they present to the court.  In all too many cases, however, people go to court thinking that they can lie their way to a more beneficial outcome.

The recent Ontario case called Dormer v. Tucker, 2014 ONCJ 141 (CanLII) shows how courts deal with such misguided thinking on the part of litigants.

There, the parents had a five-year relationship, and had two children, but never lived together.  After they separated, the mother had asked the father for child support, but he had paid very little; he constantly claimed he was unemployed and unable to pay more.

The mother eventually went on public assistance, and applied to the court for an order forcing the father to pay child support.   This resulted in an August 2013 hearing where the father told the court he had been unable to find work since late 2012, but that he might be able to find work within the week.   In truth, he had started a $58,000 job three months earlier.

In granting the mother’s request – including a request for retroactive support – the court said:

The father has engaged in blameworthy conduct. I find that he only made the three support payments of $100 each to the mother in 2012, despite the fact that he has been employed full-time and was aware that he had a far greater support obligation. He preferred his own interests to those of the children.

There will be some hardship to the father due to a retroactive order. However, this court has little sympathy for him. He has underpaid support for many years. He has placed his own interests ahead of his children’s interests. Any hardship is directly a result of selfish choices that he has made. Any hardship can be addressed through a reasonable repayment plan.

The father is very fortunate that the mother did not seek a larger retroactive support order.”

The father was simply not a credible witness; the court gave only perfunctory consideration to his objection that his paying retroactive support order would amount to a hardship.   The court pointed out that “hardship” did not mean awkwardness or inconvenience, but rather a situation that was “exceptional, excessive or disproportionate”, none of which were the case here.

Do you suspect that your Ex is lying about how much he or she earns, or about being unemployed?  Contact us for a consultation.